The project is locating in a total residential region, which according to the neighborhood, needs a proper syntax with the surrounded urban fabric.  Moreover, sitting in a major region (S2), defining commercial-Office and service centers and areas (dominance of green and open spaces), the land’s abilities due to topography and height variation of 15 meters from the south to the north, are major concepts forming the primary design considering an urban public space emphasizing green architecture.

Commercial section has been combined with its surrounded area as a platform with simple green-covered mass while equipped pedestrian routes in two sides of the building are connecting the Entrance, or better to say the south part, to overhead openings. Therefore, the western route which is more long, continues to the commercial third floor roof (the major platform), and the eastern route which is more short continues to the commercial first floor and office entrance yard.  The office bulk has been located in the middle of the site considering the height and distance to the residential region around it.  Regarding inner spaces and avoiding huge mass have been considered as well. According to the design primary framework on land capability to separate, one part of office buildings has been located in the municipality lot to provide the client request based on the project phasing.

To reach the design functional form it has been tried to define different uses based on the project primary plan then organize them according to a specified framework. Major direction forming the plan is a central axis along the project in which three vertical axes in the beginning, middle and at the end of this direction are making the plan structure.

Main accessibilities in the commercial floors are escalators and panoramic elevators next to the central void while sideway corridors are locating at the beginning and the end of the central void connecting to emergency stairs. To provide a unique area in the heart of the building, a central void has been designed to create light and form diversity by open and closed spaces.  Central yard, performing as office buildings entrances, has been located in the middle of this central axis and the vertical accesses to these buildings have been provided in the corners of this yard.

Office buildings elevators are passing through commercial floors next to the main void while visual perspective of them with this area have been preserved. NE side of the site, the municipality lot, has been connected to the vertical axis of the design structure via shifting a few degrees aside and office tower has been designed above of it; office lobby is being accessed by an alley ending to the central yard. Thus, this section will have the capability of separate construction operation from the main part.

Pedestrian routes have been planned and located based on functional requirements, site location and emphasizing their union. Main entrances of the project have been foreseen regarding site possibilities from two southern and eastern sides while according to the existing height variation they can be accessed by two different floors. Therefore, the commercial main entrances are from the south on the ground level and from the east on the first commercial floor; the eastern commercial entrance is in the same level with office buildings entrance. These two levels are connected to each other from inside the commercial platform as well as the eastern pedestrian ramp. A sunken garden has been designed in the south part of the site to provide accessibility and invitation to the underground level where the hypermarket is located; a repose area has been considered among these levels as well. A passage and a yard have been designed to provide independent accessibility to office buildings from Aqaee Street, in the same level with commercial first floor. This yard is connected to the commercial first floor and can be used for staff resting time and commercial food court.

Combination of different land uses, provide access constraint, large built area, requiring over 4500 parking lots requirement and complex service access requirements are main limitations in planning and designing vehicle accessibilities. According to necessity of separated exits and enters, four ramps have been considered to apart each section’s parking entrance. Considering Aqaee Street as a one direction road to the south, commercial parking entrance will be provided from this side of the land. Commercial parking exit has been foreseen from the SW corner and to the Lavasani Street.

Office parking entrance ramp has been intended next to the commercial parking exit and before it to provide maximum distance from the Lavasani-Aqaee Junction; Office parking exit is located across the southern side in the SE corner. A cargo has been designed on the northern side of the site where has access from Aqaee Street to avoid tracks to enter Lavasani Street as well as providing an area for unloading which is one of the essential requirements of the hypermarket.

Locating the cargo and centralizing stores (accessible from all commercial and parking floors) in this part, a service section has been defined for the project which is one of the important issues in design functional planning.

It has to be mentioned that one of the vehicle access ramps and the dock way will be eliminated if the municipality lot is not possessed; in this case, office parking entrance ramp will be assigned as main vehicle access and the pedestrian ramp to the underground level and hypermarket will be defined as cargo.

Parking floors distribution has been proposed, regarding expenditure duration and stability of users, as follows:

The façade is influenced by proposed mass concept. It has been presented as a platform for commercial section; a simple façade with limited openings. The commercial façade plates have different angle to provide diversity on the mass and gaps between these plates are used as skylight. Entrances are designed as a groove on the façade without using any other element. Office buildings facades are more divers, dividing to three major parts. First part is the southern towers façade covered by horizontal louvers. Various parts of this façade are covered green via withdrawal sections as balconies with varied dimensions.  A solid wall with varied openings, interval from the main façade, has been designed in the east and west sides surrounding the office central yard as well as the western side of the separated office tower; green spaces are proposed in the gap between the main façade and this wall which will avoid direct west and east light. All other parts of the façade are covered by glass systems. 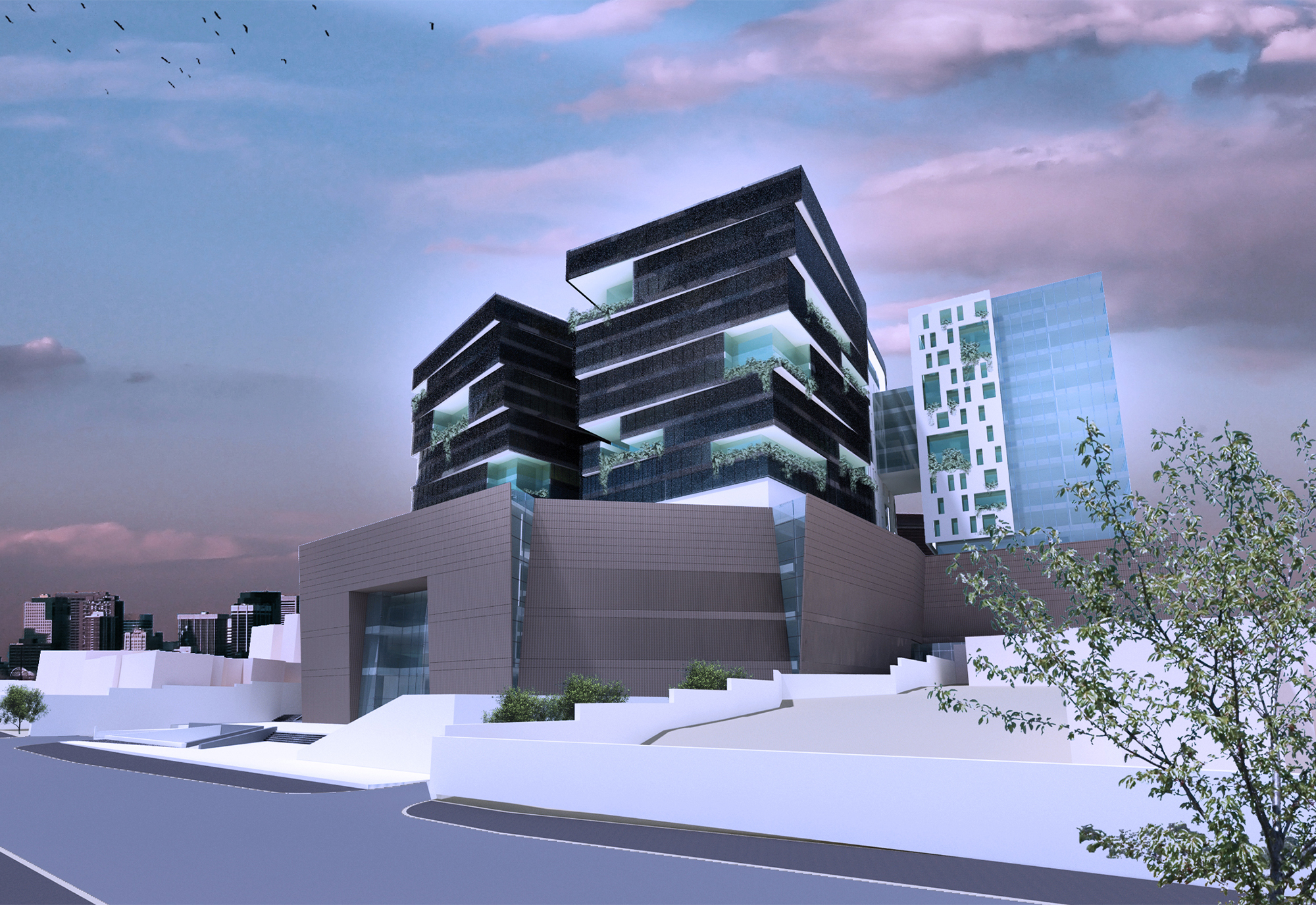 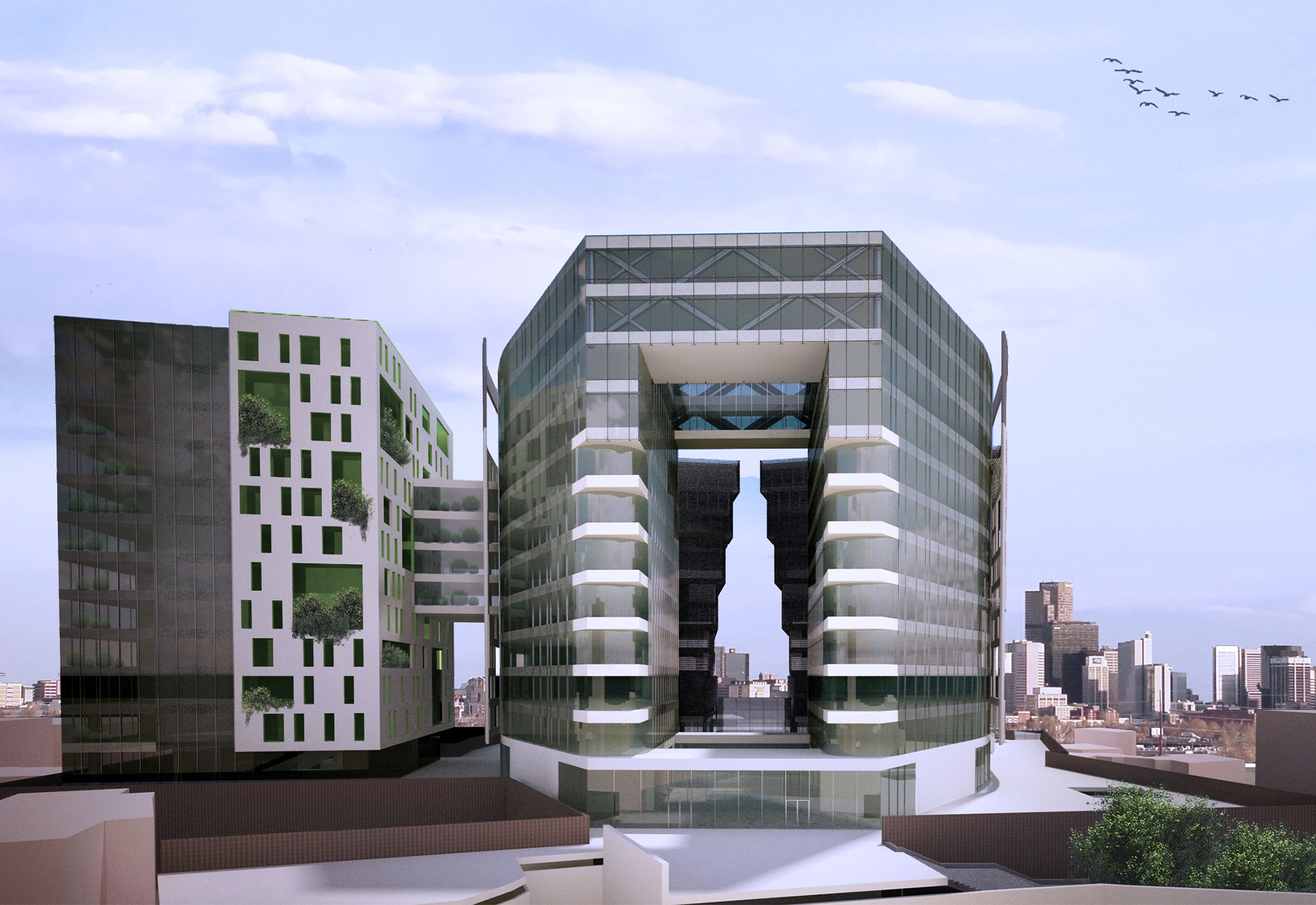 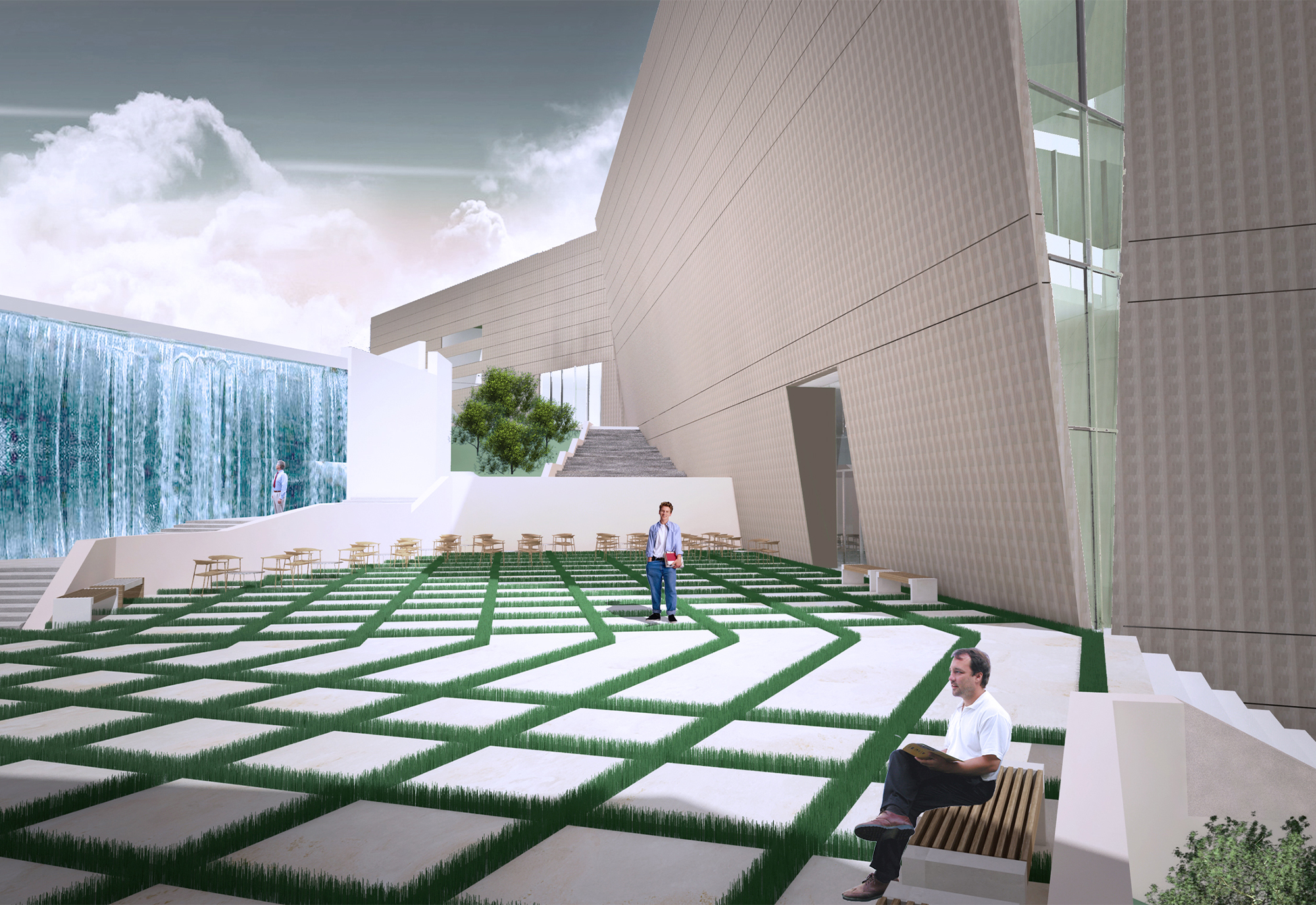 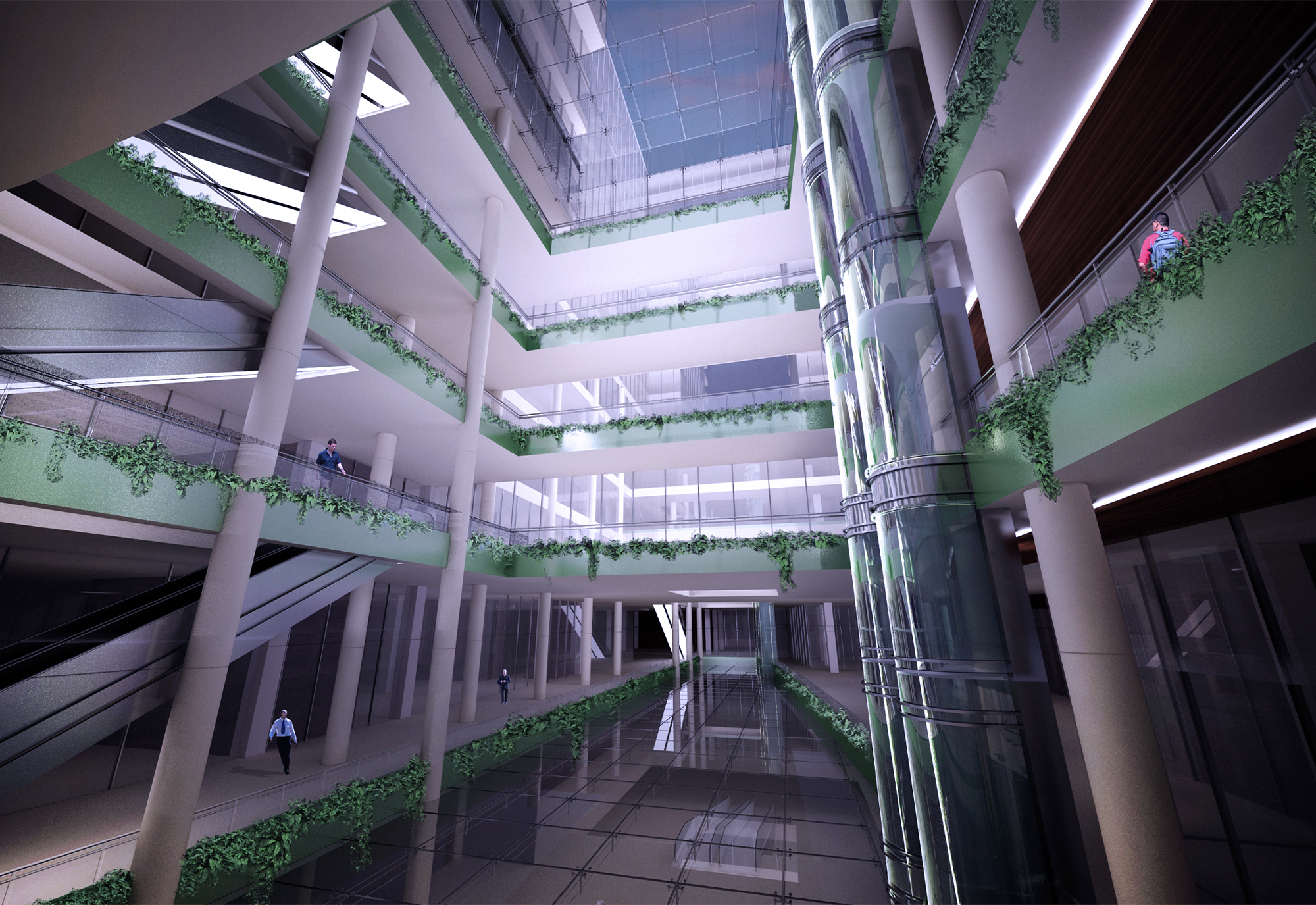 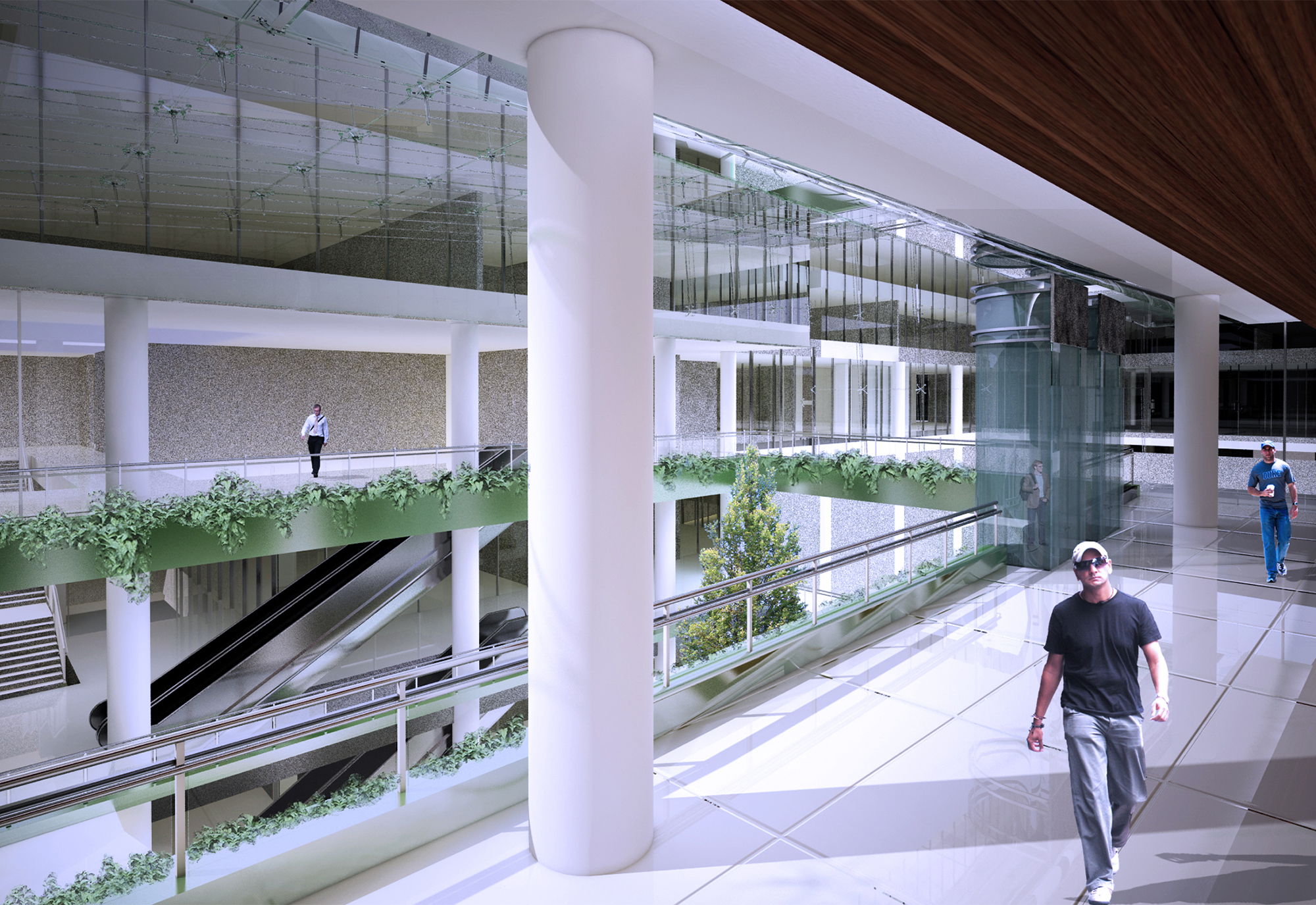 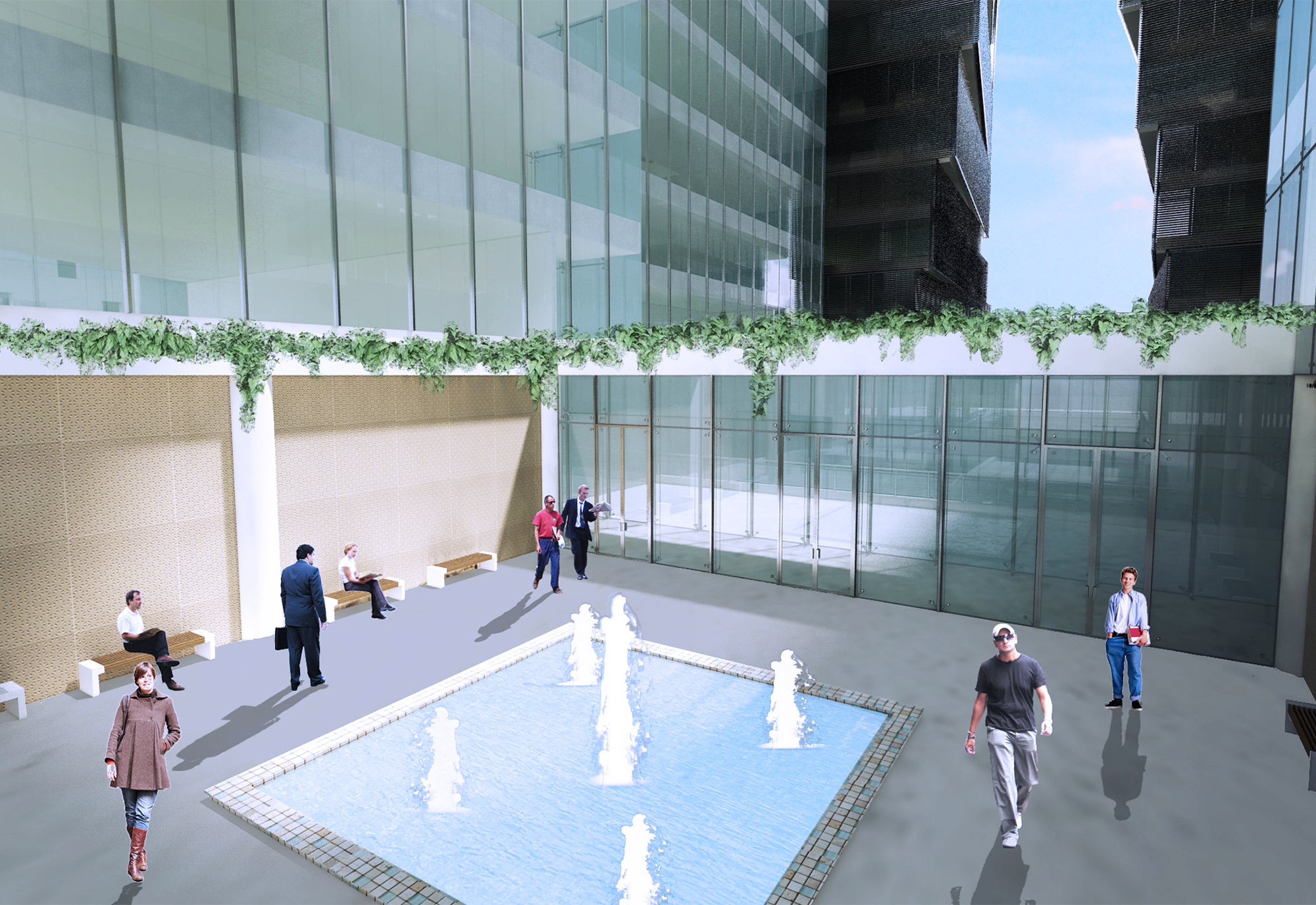 Design of the upper space of the Tehran-Tabriz Railway Tunnel